The SP 500 and Gold are in the last stages of the rally from July
David Banister- www.markettrendforecast.com  Dec 5th 2010
The Elliott Wave patterns that I use to forecast movements ahead of time in the SP 500 and Gold for my subscribers have been textbook perfect for quite some time.  We can go back to the March 2009 lows and clearly identify 5 waves up to the 13 month initial rally high in April of this year.  This was followed by a clear ABC wave 2 pattern to the 1010 lows on July 1st.  Right now, the SP 500 is in wave 5 up since July 1st, and that means this is a terminal wave underway before a good sized correction ensues.
Investors should expect the SP 500 to rally up to 1285 as a minimal upside target, with the market likely peaking in the Mid January 2011 period prior to a new correction pattern.  That correction will take the markets down to the 1150-1180 ranges more than likely from the January highs and knock the sentiment levels back to bearish before the next big advance.  Below is where I see the current wave patterns, and as you can see, this is the 5th and final wave stage of the advance. Ride it up, but lighten up as we approach my figures is my advice. Subscribers to my TMTF service have been riding this stage of the bull long since early July, and we keep them updated every week on the action. 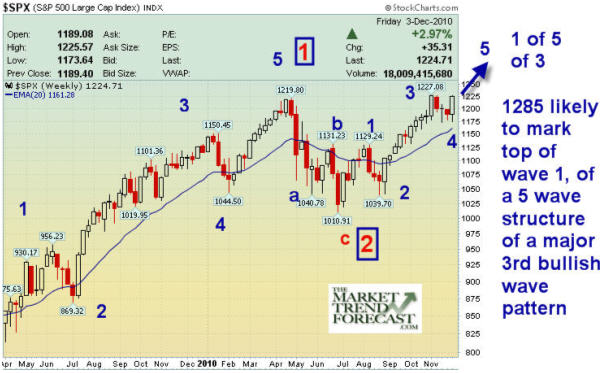 Gold has also completed it’s 4th wave corrective pattern at $1331 per ounce recently, and as I have forecasted recently should continue it’s upward trajectory to about $1480-$1525 before a good sized correction will ensue.  Gold bottomed this summer in a classic wave 2 correction at $1155 per ounce, which was a 50% Fibonacci re-tracement of the rally up to $1225 from $1040.  My objectives are for this pattern to complete around the same time as the SP 500 peak in Mid January as well. Downside objectives from there are likely to be to the $1310 per ounce range from the $1480-$1525 peaks, but more on that as we approach.  I do not like to get too far ahead of myself in my projections, taking it one leg and pivot at a time. 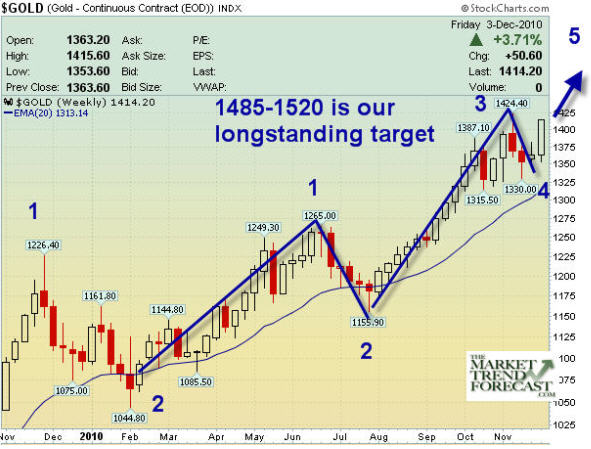 If you’d like to be consistently ahead of the major market and precious metals moves and profit from that positioning, then consider subscribing today. Visit www.markettrendforecast.com for the details and a coupon to subscribe.

David Morgan
Previous ArticleThe S&P 500, Gold, Oil, & the Banks – What a Conundrum
Next Article Next Post