Investors and traders alike were watching the action unfold across the pond earlier this week. It was seemingly a foregone conclusion that Greece would get the bailout they desired in order to prevent a potentially catastrophic default. The Greek default situation increased volatility in financial markets around the world. In addition to the Greek dilemma, the end of the 2nd quarter and the customary window dressing by institutional money managers only heightened the volatile situation.
For the past week or so I have been sitting in cash, watching the price action and waiting for setups that have defined risk and solid rewards. With the heightened volatility I did not want to get involved because a trade in the wrong direction would wreak havoc with my portfolio. As this week evolved, the validity of those concerns was unquestionable.
Commodity investors have faced some tough price action recently as gold, silver, and oil have traded significantly lower quickly. Now that we have witnessed some heavy selling pressure set in particularly in the silver and oil markets investors want to know where price is heading in the short term.
U.S. Dollar Index
For the past several months I have been monitoring the U.S. Dollar Index futures in order to gauge the price action in commodities and the S&P 500. The Dollar is currently trading at a key support level and the price action in coming days will be telling. While I do not trade solely on analysis pertaining to the Dollar, I do look for setups where an underlying is dramatically impacted by its price movements.
When the planets align, I will take a trade with a directional bias that is supported by the price action in both the underlying that I’m trading and the U.S. Dollar’s price action as well. At this point in time, the U.S. Dollar Index is trading right at a key support level marked by the 20 & 50 period moving averages as well a recent low. The daily chart of the Powershares U.S. Dollar Index Bullish Fund $UUP is shown below:
UUP Daily Chart 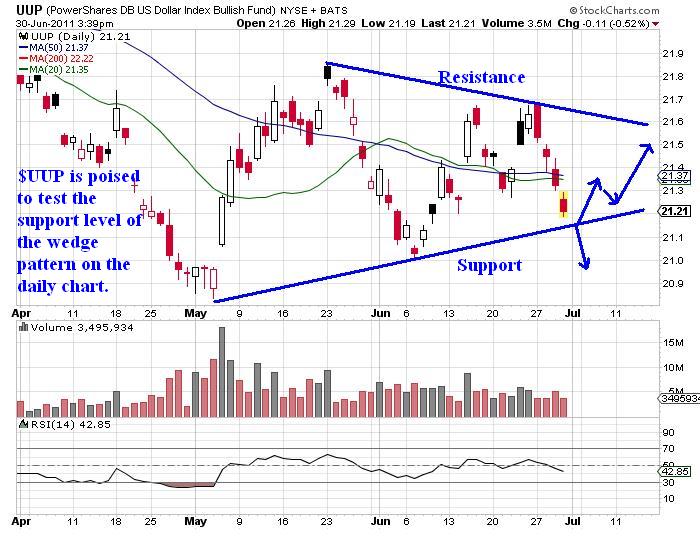 Gold & Silver
The recent bounce higher in the U.S. Dollar has been a factor in pushing gold, silver, oil, & the S&P 500 lower. Silver and oil were impacted in the harshest manner, but all four asset classes were negatively impacted. Precious metals tend to weaken during the summer and then pick back up in the fall. However, the selloff in silver the past few months has been breathtaking. For precious metals bulls who entered silver late in the rally the only outcomes were dismal. Late comers to the silver bull market were either stopped out or are currently experiencing significant pain.
While I remain a longer term bull as it relates to precious metals, in the short term I expect lower prices to continue. A major factor in my analysis stems from a longer term standpoint; the U.S. Dollar has likely put in an intermediate to long term low. There are a variety of reasons as to why, but suffice it say that from a market cycle standpoint the Dollar has likely achieved a major low and a reflex rally is likely.
Issues in the Eurozone are far from over and as time passes I expect the impact of fiscal issues rising in countries like Ireland, Portugal, and Spain to have a major impact on U.S. Dollar prices. If the sovereign fiscal issues in Europe result in a default or even a more mild technical default, the impact will likely be bullish for the U.S. Dollar.
The daily chart of the SPDR Gold TR ETF $GLD and the Ishares Silver Trust $SLV shown below illustrate the key areas which may be tested before the bull market in precious metals continues:
GLD Daily Chart 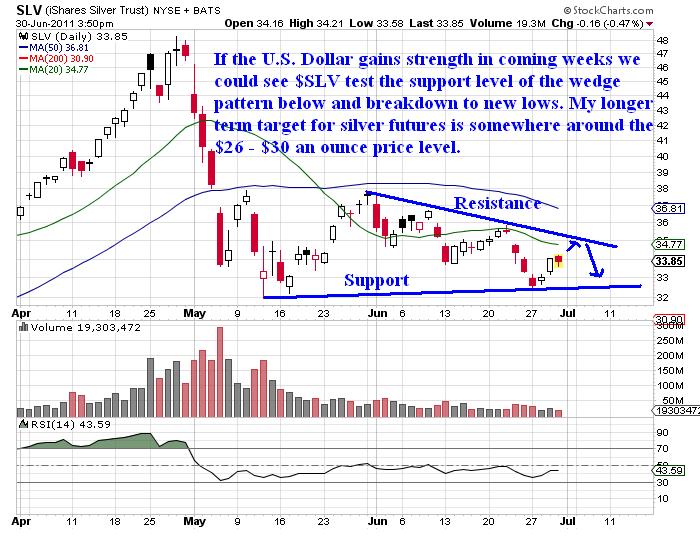 I am of the opinion that if precious metals investors are patient an outstanding buying opportunity will present itself in both gold and silver in weeks ahead. Looking at the daily chart of the two shiny metals and identifying key levels that make sense to acquire positions is important in the trade planning process.
I like to have a trading plan in place should my expectations unfold because it removes emotion from my trading. Planning a trade and trading a plan are extremely helpful when investing in volatile markets like silver and gold. In the longer term, I continue to believe that gold and silver will shine, but in the short term more price weakness may be ahead.
Crude Oil
I am a long term gold and silver bull, but the single asset class that I am the most bullish about is energy. Oil prices in the long term have only one direction to go – HIGHER. I realize that a slowdown in the economy will put downward pressure on oil prices, but as the world’s demand for oil increases and the supply level plateaus or decreases oil prices will be forced higher. If the Dollar does rally as I expect, oil prices would likely be negatively impacted and a buying opportunity would be forged.
The daily chart of the United States Oil Fund ETF $USO is shown below with my future price expectations and current key price levels illustrated:
Oil Daily Chart 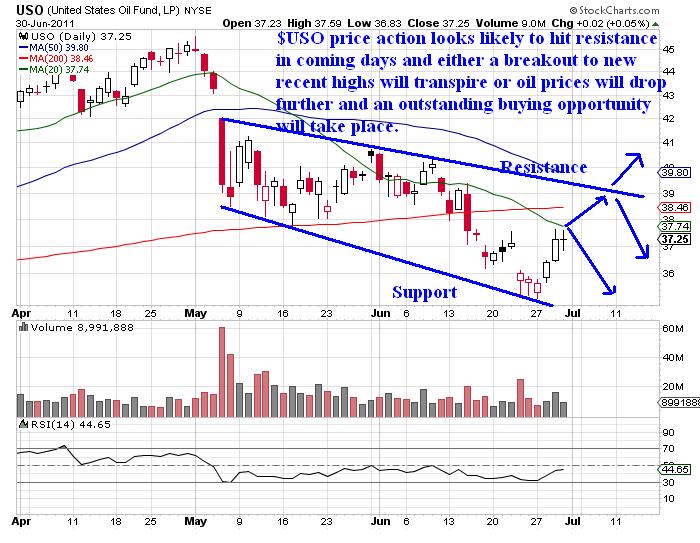 S&P 500
The S&P 500 is in a very tricky spot for traders. Right now price action is testing the underbelly of a major descending trendline on the daily chart shown below:
SPX Daily Chart 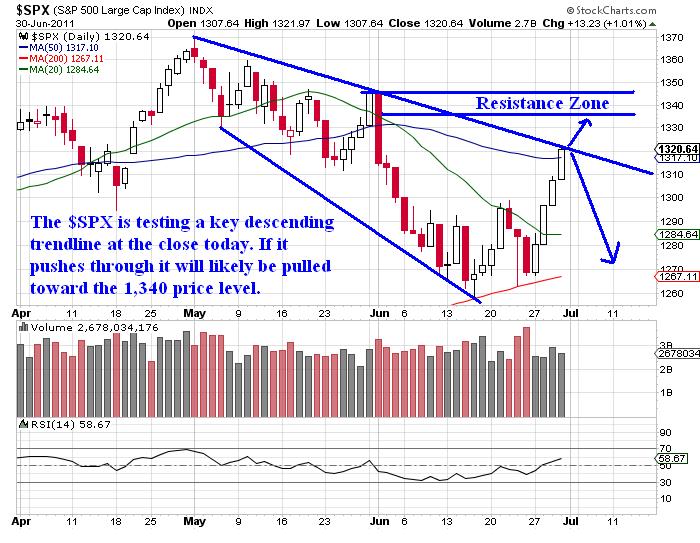 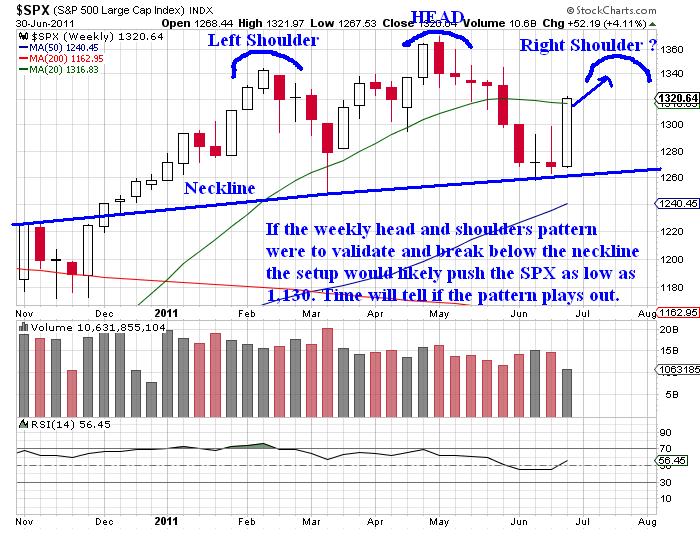 In the short run I think the S&P 500 can work higher, but if I’m right about higher prices for the U.S. Dollar in the future I expect to see much lower prices in the S&P 500 in the intermediate term, particularly if the weekly head and shoulders pattern plays out. If the S&P 500 struggles to breakout above key resistance levels, I will be of the opinion that the bear may have stopped hibernating and an impending recession may be thrust upon us in short order. There are signs pointing in that direction, but right now it remains too early to call.
Conclusion
In closing, my analysis reveals that the U.S. Dollar is poised to push higher, particularly if current support holds. If the Dollar can push above key resistance levels overhead, I expect the resulting price action in gold, silver, oil, & the S&P 500 to be dismal for the bulls.
I will be watching the Dollar closely looking for clues about price action. If I’m wrong and the Dollar breaks to new lows I would expect a massive rally in precious metals, energy, and domestic equities. With the recent price action that we have seen in the U.S. Dollar, I find it much more likely that the U.S. Dollar extends higher in coming weeks. As usual, time will tell.
If you would like to be informed several times per week on SP 500, Volatility Index, Gold, and Silver intermediate direction and option trade alerts…
Take a look at www.OptionsTradingSignals.com/specials/index.php today for a 24 hour 66% off coupon, and/or sign up for my occasional free updates.
JW Jones