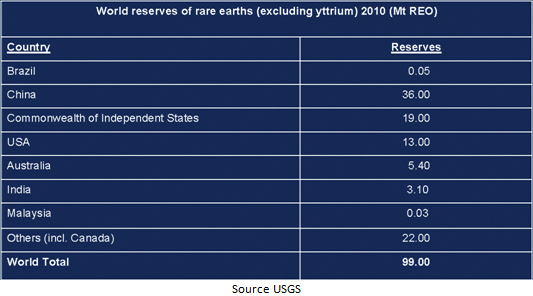 The principal economic sources of LREE are the minerals bastnasite and monazite. In most rare earth deposits, the first four REE – La, Ce, Pr, and Nd – constitute 80 to 99 percent of the total.
Deposits of bastnäsite in China and the United States represent the largest percentage of the world’s Rare Earth economic resources.
The second largest percentage of the world’s LREE Rare Earth economic resources is monazite. Monazite contains less La, more Nd and some HREE with usually elevated levels of thorium compared to bastnasite.
Ion-adsorbed REE in clays from South China provide the bulk of HREE to the market place.
Uses
Many REE applications are highly specific and substitutes are inferior or unknown:

China
China mines REEs from bastnäsite ore in the provinces of Gansu and Sichuan. In Inner Mongolia REEs are obtained as a by-product from iron making.
HREE extraction, based on ion absorption clays, occurs in the states of Guangdong, Hunan, Jiangxi and Jiangsu. These clays have very low cerium content and as a consequence the other REES, in particular the HREEs, comprise a much larger share of the ore than is typically found elsewhere.
Currently Chinese ion absorption ore is the main source for HREE and resources are not published. There may be the possibility of discovering new ion absorption deposits in Southeast Asia, however high costs for labor, lack of infrastructure and environmental restrictions may render these new deposits uneconomical when competing in the market place with Chinese output.
China has 36 to 53 percent of the world’s REE deposits (industry figures differ) and supplies 97 percent (this number is constant) of the global demand for rare earth elements. The low cost and unregulated production from China’s large deposits forced the closure of almost every rare earth mine outside of China.
Tighter limits on production and lowered export quotas are being put in place to ensure China has the necessary supply for its own technological and economic needs – in 2006 volume dropped to 48,000 tonnes. In 2007 volume dropped to 43,574 tonnes, in 2008 volume dropped to 40,987 tonnes and in 2009 to 33,300 tonnes. In 2010 China dropped its annual REE export quota by 37% and then announced an additional 35% drop in its H1 2011 export quota.
In a hunt to secure jobs, and access to advanced technologies, the Chinese have forced manufacturers needing access to REEs to make their products in China. These manufacturers must either cut back production or build their factories/products in China –  recently major producers of the magnet material Neodymium-Iron-Boron have transferred their operations to China.
Demand for Rare Earths is forecasted to grow at 8-11% per year between 2011 and 2014. Many experts are predicting that the Chinese, and those end users who moved to China for security of supply, will be internally consuming most of the countries rare earth production by about 2014. 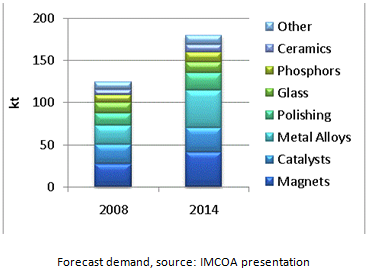 The highest demand growth is expected for magnets and metal alloys – hybrid and electric vehicles along with wind turbines (also High Speed Rail) will compete for the essential materials and there are no substitutions for the REEs used in these applications. An increased use of energy efficient fluorescent lights and growing demand for LCDs, PDPs will increase the use of phosphors.
The French Bureau de Recherches Géologiques et Minières rates high tech metals as critical, or not, based on three criteria:

It’s very obvious REEs are critical metals and that the west is going to need a secure, long term supply of Rare Earth Elements completely independent of Chinese control.
There are a lot of junior companies in this space competing for investor attention.
Wilderness of mirrors
“Wilderness of Mirrors” is a phrase coined by the 1950s era counter-intelligence chief John Foster Dulles to describe the intelligence game. In particular, the phrase refers to the difficulty of separating disinformation from truth.
One of the world’s foremost REE geologists and mineralogists Anthony “Tony” Marianno says each REE deposit, assuming a favorable political climate and good logistics, will need certain conditions present:

Dudley Kingsnorth of Industrial Minerals Company of Australia (IMCOA) outlines the necessary steps to take a REE deposit all the way to production:

There are significant barriers to entry into the Rare Earths market: 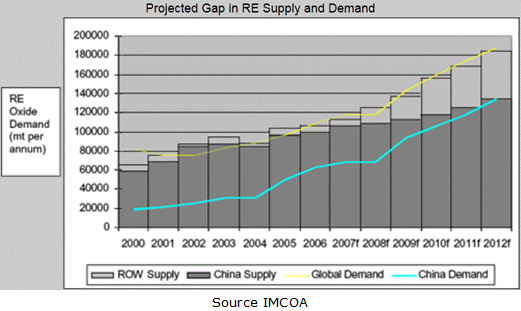 Many of the deposits being counted on for near and mid-term supply simply don’t, in this authors opinion, have the mineralogy and/or the necessary close by infrastructure to compete in the market.
The Future
The future for some of our junior company’s REE deposits (the ones with the right mineralogy and that are of sufficient tonnage) will be end users securing off take agreements or buying a company’s REE deposit outright to have security of supply.
Spending 200 or more million dollars for outright ownership of a deposit, or doing a strategic financing to get the deposit into production for an off take agreement is very little money upfront to take so much security of supply risk off the table for a major high tech manufacturing company or a value added rare earths producer.
Conclusion
The opportunities in the junior REE sector are significant. But the junior population is quite large – there are literally hundreds of stocks to choose from that want your dollars.
There is a steep learning curve and there are serious risks – great rewards come hand in hand with great risk. You must be prepared to do your own due diligence and uncover the opportunities.
You must be able to evaluate these opportunities, pay regular attention to your portfolio, manage the risk and take responsibility for your own decisions.
Fish, in their album “Vigil in a Wilderness of Mirrors” sang:
I keep a vigil in a wilderness of mirrors
Where nothing here is ever what it seems
Good advice.
Is the REE junior resource sector, with its immense opportunity, on your radar screen?
If not, maybe it should be.
Richard (Rick) Mills
[email protected]
www.aheadoftheherd.com
If you’re interested in learning more about the junior resource, bio-tech and technology sectors please come and visit us at www.aheadoftheherd.com
Site membership, and our AOTH newsletter, are free. No credit card or personal information is asked for.
***
Richard is host of Aheadoftheherd.com and invests in the junior resource sector. His articles have been published on over 300 websites, including: Wall Street Journal, SafeHaven, Market Oracle, USAToday, National Post, Stockhouse, Lewrockwell, Uranium Miner, Casey Research, 24hgold, Vancouver Sun, SilverBearCafe, Infomine, Huffington Post, Mineweb, 321Gold, Kitco, Gold-Eagle, The Gold/Energy Reports, Calgary Herald, Resource Investor, Mining.com, Forbes, FNArena, Uraniumseek, and Financial Sense.
***
Legal Notice / Disclaimer
This document is not and should not be construed as an offer to sell or the solicitation of an offer to purchase or subscribe for any investment. Richard Mills has based this document on information obtained from sources he believes to be reliable but which has not been independently verified.
Richard Mills makes no guarantee, representation or warranty and accepts no responsibility or liability as to its accuracy or completeness. Expressions of opinion are those of Richard Mills only and are subject to change without notice. Richard Mills assumes no warranty, liability or guarantee for the current relevance, correctness or completeness of any information provided within this Report and will not be held liable for the consequence of reliance upon any opinion or statement contained herein or any omission.
Furthermore, I, Richard Mills, assume no liability for any direct or indirect loss or damage or, in particular, for lost profit, which you may incur as a result of the use and existence of the information provided within this Report.
For site advertising rates contact: [email protected]
Richard Mills owns no shares of any companies mentioned in this report and none are advertisers on his site aheadoftheherd.com