Only 5 short months ago the S&P 500 was trading at the 2011 highs around the 1,370 price level on the S&P 500 Index. Since then, the price action has devastated investors and traders alike. As of the close on Monday, the S&P 500 had worked over 270 handles lower in 5 months. The price action since September 27th has been a bloodbath.
It is true that the S&P 500 could be carving out a double bottom on the daily chart, but I am of the opinion that there may be more work to do to the downside. We are oversold on the daily and weekly price charts, but I have yet to see the kind of panic level selling that typically precedes a price reversal. The chart below illustrates the number of stocks that are currently trading above the key 50 period moving average: 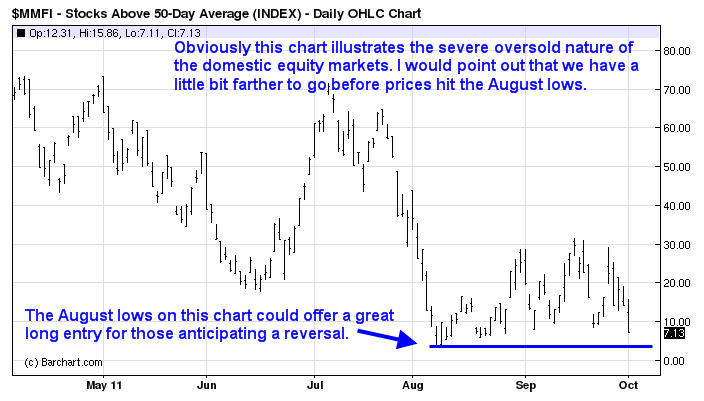 While most market participants are concerned about a trap door that causes prices to cascade lower, I am concerned that at some point news will come out that could rip the bears’ faces off. The majority of retail investors are running for cover. The sentiment levels are decidedly bearish and the last thing most traders are looking for is a rally. The contrarian trader in me cannot deny that a rally would do a lot of damage in the near future, but Mr. Market needs to suck in a few more bears in order to do the most harm.
One sound bite out of Europe could alter the price action almost instantly in favor of the bulls. The ECB could suddenly cut interest rates or announce that Eurobonds are going to be made available. Either two headlines or a combination of both headlines would most likely drive prices significantly higher.
After the nasty downside probe today, there are layers of buy stops above current price levels. If price worked high enough, the stops would be triggered and an all out rally could play out. Anything coming out of the Eurozone that appears to be either stimulative or that appears to push an ultimatum out on the time spectrum will be viewed as positive.
Often news and price action play out together at key support/resistance levels and it would make sense that some form of announcement will be made when the S&P 500 price is sitting right at a long term support level. As can be seen from the weekly chart of the S&P 500 Index ($SPX) below, the 1,008 – 1,050 price level is of critical importance. 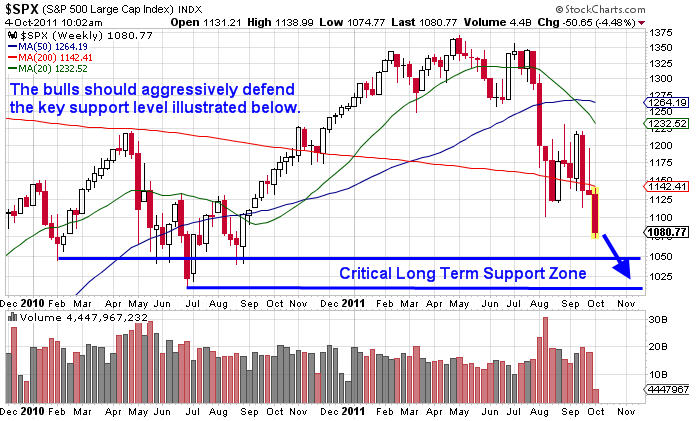 The primary support levels I am watching on the S&P 500 if it continues lower are the 1,080 price level which should act as short term support. If that level breaks the 1,050 area will become a major support level that bulls will likely defend fervently. Additional long term support will come in around 1,008. I would be shocked to see the S&P 500 push through both the 1,050 and the 1,008 price level on the first attempt, but stranger things have happened.
If price works down to the 1,008 – 1,050 support zone it would not be shocking to see a strong reversal higher. With the recent carnage we have seen in the S&P 500, I find it hard to believe that we could see another 10 – 15% more downside before a reversal plays out. The 1,008 – 1,050 price zone seems ripe for a test, but one other scenario would be a test of the 1,080 support zone that fails intraday and by the close is regained. The chart below illustrates the two most probable scenarios: 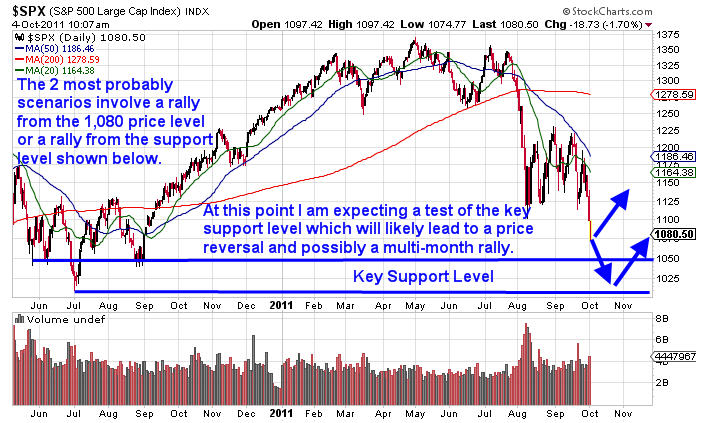 Financial markets do not offer a sure thing, however it is without question that bulls will aggressively defend the 1,008 – 1,050 price level on the S&P 500. If that level fails, the price action is going to get far worse and an all out crash could be underway. For now, I am of the opinion we are within 7% – 8% of an intermediate term bottom which could produce a strong multi-month rally into the holiday season
As always anything could happen, but traders need to keep their eye on both sides of the price action. A rally would do a lot of damage to the bears as well as the under-invested retail traders and investors. Ultimately the price action is in the hands of Mr. Market, but it is a well known fact that Mr. Market likes to trap traders and inflict pain on as many market participants as possible. A forthcoming rally  would offer yet another opportunity for a lot of traders to eat another slice of humble pie
Subscribers of OTS have pocketed more than 150% return in the past two months. If you’d like to stay ahead of the market using My Low Risk Option Strategies and Trades check out OTS at http://www.optionstradingsignals.com/specials/index.php and take advantage of our free occasional trade ideas or a 66% coupon to sign up for daily market analysis, videos and Option Trades each week.
This material should not be considered investment advice. J.W. Jones is not a registered investment advisor. Under no circumstances should any content from this article or the OptionsTradingSignals.com website be used or interpreted as a recommendation to buy or sell any type of security or commodity contract. This material is not a solicitation for a trading approach to financial markets. Any investment decisions must in all cases be made by the reader or by his or her registered investment advisor. This information is for educational purposes only.