Over a month ago I began to issue a warning to traders and investors who were long precious metals that a possible correction was likely. Prices were overextended and nearly every 5 minutes a gold investment advertisement was appearing on my television. Additionally gold advertisements could be heard during commercial breaks of many right leaning radio talk show hosts, not that I listen to them or anything.
This article is not about pounding my chest, it is about a learning process that many investors fail to take the time to learn. It is easy to grandstand and speak in analogies when discussing the financial markets, but in the end the name of the game is to buy low and sell high or sell high and buy low depending on which direction a trader expects an underlying to move. I believed gold was overbought several weeks ago and while my timing was not precise, the eventual price action has followed my thought process.
The single greatest threat to profitability for investors and traders is getting caught up in the financial media and punditry. I try to stay away from the financial media at all costs as I do not want my view of the financial markets blurred or altered by the commentary of a so-called expert that I am not familiar with at all. About the time when I was calling for a correction in gold, the financial media was putting out tremendous bullish hype regarding gold and I’m guessing television channels like CNBC had commentators declaring their love and long term desire to own gold in their portfolio.
This is not to say that gold will not work higher in the future. In fact, research from fundamental and technical analysts suggests that gold prices could continue going higher for several years as the United States continues to devalue our currency while running massive budget deficits. No one really knows for sure what will eventually happen, but it would not be shocking to see gold continue to rally in the future. However, the shiny metal needs to wash out some weak owners by moving lower and working off long term overbought conditions before making a run at breaking out to new highs.
The daily chart of gold futures is listed below: 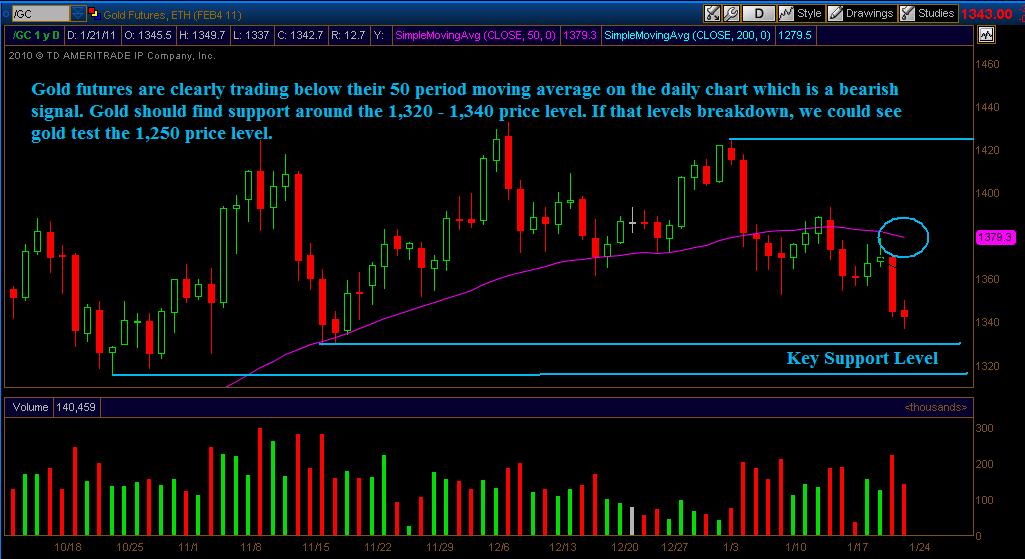 The chart above outlines a key support level which may eventually be tested. If that price level breaks down, a major correction in gold will be underway and price could potentially test the 1250 price level. For those wishing to get long gold in the future, I would devise a trading plan ahead of time with price points where you would like to add to your position as prices move lower. Gold is experiencing some heavy selling pressure and it could be going through a possible correction. The real question remains: how long will the correction last and how low could the price of gold actually go?
Light Sweet Crude Oil
Oil prices have been trading relatively choppy over the past few weeks. Light sweet crude oil futures were under significant selling pressure on Thursday and price was nearing the 50 period moving average setting up for a possible test. As the daily chart of oil futures indicates, the 50 period moving average has offered key support several times in the past few months.
Until proven otherwise, the trend in oil continues to be higher and the 50 period moving average offers a potentially defined risk level. Should prices extend below the 50 period moving average on strong volume, we could see oil sell off to the $84/barrel price level. While in the longer term oil will likely have fundamental and technical bullish indicators, it is possible we could see a corrective decline before any major move higher transpires. The daily chart of light sweet crude oil shown below illustrates the 50 period moving average and the key support level located at the $84/barrel price level.

Conclusion
As for the future prices in gold and oil, it remains to be seen as to what happens to both commodities in coming days and weeks. I would not be surprised to see oil outperform gold, particularly if the U.S. Dollar Index rallied higher. As for right now, I am going to be watching the price action waiting for a low risk setup to take shape.
In closing contrarian investors are generally rewarded for their unique ability to go against the grain time and time again. Doing the opposite of whatever the “herd” does generally leads to over performance in almost any endeavor, what would make financial markets any different?
If you would like to receive these reports please join my free newsletter: http://www.optionstradingsignals.com/profitable-options-solutions.php

David Morgan
Previous ArticleInvesting In Silver: 7 Tips To Get You Started
Next Article Uranium Report 2011