By David Morgan on August 24, 2015 All Posts The Morgan Report Market Updates 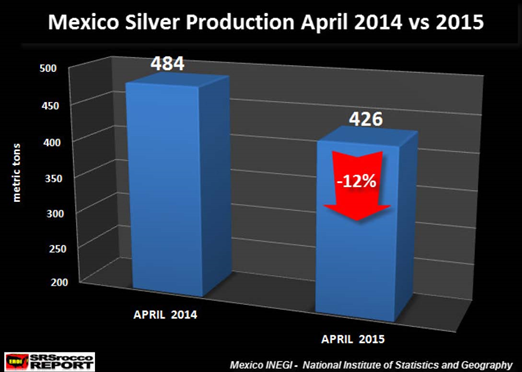 On the demand side…

Physical supply-demand and “paper silver’s” constricting tectonic plates
Declining grades and amount of silver output – most taking place right now below the cost of production – leased metals’ and futures contracts, in addition to financial derivatives amounting to hundreds of trillions of dollars around the globe. These factors taken in total, are stimulating the tectonic plates of silver supply and demand like never before. Something has to give, and it will sooner rather than later.
Steve St. Angelo, in a major new silver report here, has noted that investors tend to ramp up purchases of silver when the price is either moving strongly up or down. When it trades in a broad sideways movement, chartists refer to as “congestion”; physical purchases, especially of Canadian Silver Maple Leafs and American Silver Eagles, tend to decrease.
As if to prove his premise in short order, on Tuesday July 7, 2015, in the wake of the Greek “No” vote the preceding weekend about paying back massive loans from the ECU, silver dropped over a dollar an ounce in early morning trading, eventually closing down .55 cents on the day. Sales of American Silver Eagles reached such a crescendo (over one million that day alone) that the U.S. Mint announced it was temporarily suspending sales in order to replenish its supply of blanks.
On an even more telling note, the U.S. Mint reported that the day before, on July 6, sales of Gold Eagles rose to o 21,500 – as much as were sold during the month of May. During the first 10 days of July, a stunning 65,500 Gold Eagles were purchased!
Record short sales of silver futures contracts on the COMEX (or as cynics call it, the “CRIMEX”), are a short term bearish, longer term bullish factor. Bearish short term, because heavy shorting (where investors make money if prices drop) may portend an attempt to push silver into new lows for the move. Bullish, because if lower prices don’t materialize, or when the shorts try to take a profit, the price will be bid up substantially and quickly. Whenever a short moves to offset his/her contract(s), they must do the opposite of the initial trade, in this case buying back the contracts they originally sold. This demand, in addition to new investors who believe the price will rise, and who therefore buy their own new contracts, initiates a powerful upwards impulse..
Whether or not this buildup by the shorts portends “another leg down” in the silver price remains to be seen. At this writing the area around the 4 year lows printed last November at $14.15 are still holding. Either way, the ongoing crush of events underscores just how unstable and unpredictable the global financial house of cards has become. Given that gold and silver have been, for thousands of years, the “money” of last resort, it’s probable that as we approach the next financial unraveling, people will once again seek to hold them as preferred “insurance” if they can be found.
How a Silver Blue Screen of Death Event Might Look:
It’s a Sunday evening…

David Morgan is a precious metals aficionado armed with degrees in finance and economics as well as engineering, he created the Silver-Investor.com website and originated The Morgan Report, a monthly that covers economic news, overall financial health of the global economy, currency problems, and the key reasons for investing in precious metals.
As publisher of The Morgan Report, he has appeared on CNBC, Fox Business, and BNN in Canada. He has been interviewed by The Wall Street Journal, Futures Magazine, The Gold Report and numerous other publications. If there is only one thing to teach you about this silver bull market it is this… 90% of the move comes in the last 10% of the time! Where will you be when this happens?

Join The Morgan Report Free for 30 Days ** 30 Day Trial applies to new user sign ups only!
Offer does not apply to Premium Memberships.