Editor’s Note: 2020 is expected to be another year of significant uncertainty and turmoil. But the question is what asset will emerge the victor when the dust settles from the global trade war, Brexit, recession threats, negative bond yields. It’s a showdown of global proportions, so don’t miss all our exclusive coverage on how these factors could impact your 2020 investment decisions. 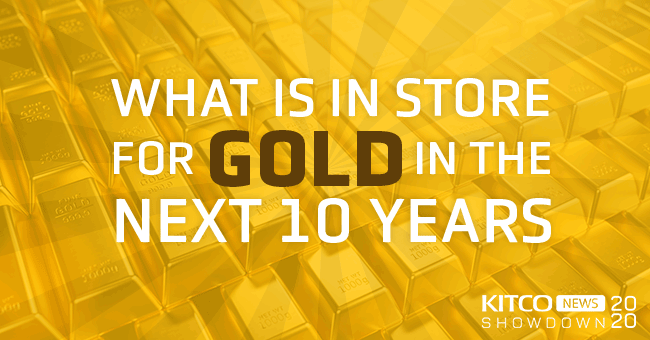 (Kitco News) – Central bankers are likely to keep printing money, and mine supply of gold will decline after reduced exploration, analysts and fund managers said.

As a result, they expect gold prices to soar in the decade ahead.

Kitco News interviewed three market veterans for their long-term view on gold: Frank Holmes, chief executive and chief investment officer with U.S. Global Investors; Rohit Savant, director of research with CPM Group; and David Morgan, independent analyst and publisher of the Morgan Report. All look for new record highs, while two see gold hitting $5,000 an ounce in the decade ahead.

Following is a synopsis of the interviews.

Holmes suggested “unprecedented money printing” will continue. This refers to ultra-loose monetary policy undertaken by central banks to flood the economy with money.

Fiscal stimulus is harder to implement since it has to work its way through different layers and branches of government.

“It’s much easier for central banks to print money,” said the CEO of U.S. Global Investors. “And as long as that takes place with no checks and controls, then it could go to $10,000.”

Homes characterized the G20 industrialized nations as an OPEC-like “cartel” printing money. This is especially the case with fewer major currencies since the advent of the euro, replacing most of the individual European currencies.

Against this backdrop, “all of a sudden it’s much easier to print money excessively,” Holmes said. Besides low short-term interest rates, there also have been several rounds of quantitative easing, in which central banks buy bonds to push down long-term interest rates.

“It’s an incredible backdrop for gold, because it’s much easier to print a $1 trillion repo in U.S. dollars than it is ever going to be to produce $1 trillion in gold bullion,” he said. “It takes a long time to produce gold….So it’s going to retain that value.”

“First one beer gave them that feeling, then it took five beers, then 10 beers….That metaphor is the same for drinking as for printing the money to try to stimulate economic growth.”

Meanwhile, the mine supply of gold is likely to decline over the next decade, Holmes said. There has been limited new technology to find new supply, as well as limited spending by companies on exploration. Further, he cited “tremendous” environmental costs of opening new mines, as well as “great risks” when mining far underground.

“All of this bodes for tighter supply,” Holmes said.

He used palladium as an example of how much a commodity can soar when supplies are tight. This metal is roughly some 53% for the year to date as demand for auto catalysts remains strong but supply did not follow suit.

“Palladium has been on a tear,” Holmes said. “Why? Supply peaked a long time ago.”

CPM Group looks for gold to fare well in the decade ahead as mine output falls but central-bank and investor demand remain strong, said Savant, director of research with the consultancy.

“We think that gold prices will probably reach new record highs on an annual average basis over the next 10 years,” Savant said.

The main influence will be the lack of capital expenditures on exploration and development after the sharp decline in gold prices back around 2012, Savant said. This means fewer new projects and mines.

Meanwhile, central banks have been noted buyers in recent years. And Savant looks for them to remain net buyers. Central banks added 656 metric tons to gold holdings in 2018, the most since 1967, and World Gold Council data shows they had already accumulated 562 tons through the first 10 months of 2019.

“We think they will continue to buy gold as a way to diversify away from the [U.S.] dollar,” Savant said.

This helps put a floor under gold prices, he explained.

“We think investors too will remain net buyers of gold over the next decade,” Savant said. “They have a lot of reasons to remain interested in gold. You have this low interest-rate environment, which we don’t think is going away. There is a lot of political uncertainty pretty much everywhere. Again, that is not something that is going to go away.”

Meanwhile, Savant added, even though trade tensions have calmed some in recent weeks, the trend is likely to continue of countries wanting to move away from globalization, thereby boosting gold prices.

“Also, you would expect to see investors using gold as a diversifier, especially where asset prices are at this point. It makes some sense to have some of your portfolio hedged [with gold].”

Morgan: Debt burden ‘will have to be addressed’

Morgan, the independent analyst who publishes the Morgan Report, listed three main factors that he expects to propel gold much higher: the economy, stock market and U.S. dollar. The analyst figures gold could hit $5,000 an ounce in the decade ahead, especially as the greenback loses purchasing power.

“The economy is not doing as well as the mainstream financial press tells us,” Morgan said. He later added, “I think we’re going to see a continuation of that trend for the first few years in the new decade.”

As a result, he anticipates some kind of “reset” in currency valuations in the future, as well as possible debt forgiveness or restructuring. He cited an explosion in government debt, as well as dramatic increases in debt taken on by consumers and students, with most Americans overextended with personal debt.

“This debt burden that has engulfed the world either officially or unofficially,” Morgan said.

This would be addressed “unofficially” if political leaders “let things go without taking appropriate actions, which means the dollar will continue to lose purchasing power.” This would be a case of the market taking care of the problems itself, with so much confidence lost in the dollar that people begin spending heavily on hard goods before their currency loses its purchasing power, Morgan explained. This was the case in the late 1970s and 1980s.

“That’s the big problem. Once it takes hold in the public’s consciousness, there is no bank in the world that can stop it,” Morgan said.

Morgan also cited central-bank gold buying, with some nations are already exiting the dollar, selling Treasuries and moving into gold instead. “I believe that trend will continue.”

Meanwhile, the analyst characterized the stock market as “overvalued” by “almost every measure.” Gold tends to benefit when stocks tumble.

“I think the stock market could have a good year probably through the election and maybe a bit past it,” Morgan said. “But early in this next decade, I expect to see an adjustment in the stock market, which could happen as a result of the ‘reset’ or could be one of the causes to force the ‘reset.’”

Morgan pointed out that the Federal Reserve has been pumping money into the economy through repo operations, which suggests there are liquidity issues in the banking system. Banks “are not trusting each other again,” as happened back in 2008 ahead of the Great Recession, he explained.

“If the banks don’t trust each other, that freezes the system,” Morgan said. He later added, “It’s quite scary, actually.”

By Allen Sykora
For Kitco News

David Morgan
Previous ArticleGold Bottom is in, Silver Stocks Leading the Way
Next Article The Trigger Has Been Pulled for Gold