When you invest in this small innovative technology stock, not only will you be known as a visionary stock investor

I hope you liked the video. I am excited to tell you more about this ewaste company that could revolutionize the E-Waste processing and disrupt the mining industry, but first...

It's important that you sign up for our free market updates.

Every week, you’ll receive my exclusive analysis of the precious metals markets along with profitable investing insights you won’t find anywhere else.

Plus... you get members-only audio and video updates... not to mention a sneak peek at some of my most prized investing strategies including my educational webinar series.

It's easy to get started. Just enter your first name and primary email address in the fields to the right. Then click the button to start receiving our free updates and market analysis.

Learn More About How You Can Protect Your Wealth

Just enter your first name and your primary email address. Then click the button below and we'll send you the complete details on how to protect your wealth.

This revolutionary gold-production story is changing the Mining industry and nobody is talking about it but me. If you get in before everyone else hears about it... YOU could potentially make a small fortune!

Nothing is more Patriotic than respecting and supporting the ideals that gave birth to America. Many American citizens often refer to this country as the greatest nation on earth. With the freedoms and rights we have here compared to other countries, they believe that America can do no wrong. However, as great as this nation may look on paper, it is far from perfect and even the most patriotic Americans can see that I'm not wrong.

Despite how high a pedestal this country is placed upon, the truth is that it also has a lot of blood on its hands. From slavery, to wealth inequality, social injustice, and the perpetual state of its wars to name just a few "demerits".

Do You Recognize
Opportunity When You See It?

Don't Let This Opportunity Pass You By...

This is a story which The Morgan Report has followed for years, as it "made the cut".

Through all the bumps in the road it had to go through, getting patents, and sidestepping a couple of less-than-savory shareholders (who are now thankfully out of the picture). And finally joining up in partnership with one of the world's largest e-Waste processors?

Listen. If you ever intend to make and keep big money, you'd better burn into your brain a straight-forward statement that resource sector legend Rick Rule has made over and over. He says, "You can either be a contrarian, or you can be road kill."

Subscribers to The Morgan Report have been kept in the loop on this story every step of the way. And they profited handsomely last spring when the company did a spin-off and rewarded shareholders with a boatload of the new company's stock.. FREE.

To this day, the name of this company and its story are virtually unknown by our analyst colleagues, and it still has the potential to place this year's price rise in Bitcoin and Ethereum to shame... but only for investors who have the information and who - after studying it - make the decision to take a position now!

There's an interesting phenomenon in the newsletter business. A lot of folks seem to think that a newsletter is only worth as much as it costs. That you "get what you pay for."

So they feel that a $2,500 letter must be 5 times better than one that charges $500. Well, we're here to tell you that this is not necessarily the case!

We know of one "gold story" letter writer who charges $3,000 a year. When they give out a new pick, the stock jumps 30% in a few minutes, because everyone in their large subscriber base just scrolls down to the new recommendation and hits the "buy button". After a week or so, the price usually drops back down to where it was the day before the buy...leaving the button pushers sitting on a 30% loss.

One "pick" they put out last summer was listed as "a possible 10x on your money by this fall." On the day of the tout, the year's high was registered... and it's now down 60%!

At The Morgan Report we do things differently. We have a relatively small subscriber base composed of independent thinkers - a large percentage of whom have been on our sub list for years. They understand that there can be a big difference between price (of the subscription) and the value received - from the decisions they can make, based upon the breadth and depth of our research - often preceded by boots on the ground, along with video interviews of the main actors in the mining stories we profile.

Which, come to think of it, is something that few other resource sector letters do for their subscribers. Not to mention that all paid members can ask two questions per month, which we guarantee will be answered.

The Morgan Report has profiled more exploration stocks which went on to become producing mines than anyone else in the business.

Right now, we're making available an updated profile on what may become the biggest change in how gold (as well as silver, platinum and palladium) are acquired - since the invention of heap leaching in the early 1980s.

Become a member of The Morgan Report today and you will get to see the work we've already done on this company, and learn how it's set to transform gold mining forever.

So sign up now. Down the line a ways, when your friends and neighbors are complaining about how much they lost speculating in bitcoin, you'll be smiling about how much you made... and kept - because you were among the first investors to get their hands on this incredible gold-production story. 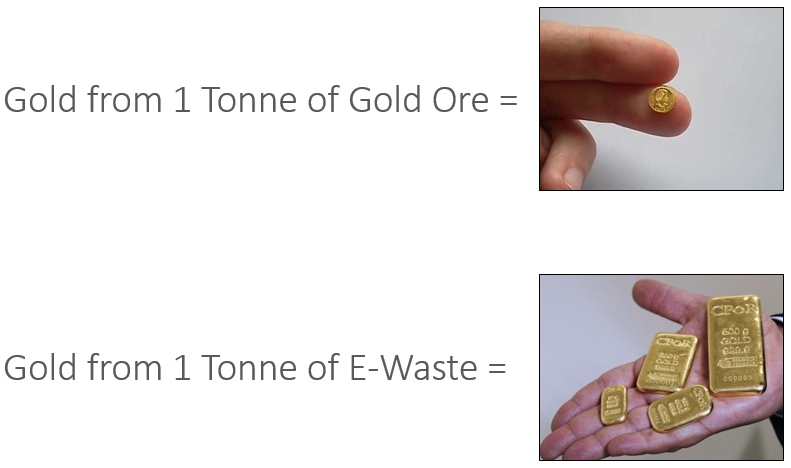 The top picture is from a high-quality gold mine today, with a yield of about $400 per tonne, compared to the output of our speculative company, at... $38,500 per tonne! It's hard to believe, we know, but this is why we want you involved.

Every now and again a huge technology shift takes place like, for example, the cell phone industry. We adopted this one early on, and now look at the amount of smart phones that are in use around the world today!